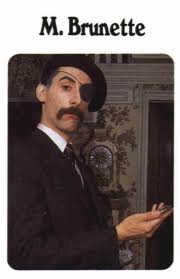 Monsieur Brunette is the stock portrayal of a foreign con artist. In most of his incarnations, he is a deceitful Frenchman out to con others for his own personal gain. Brunette's name is derived from one of the oldest originally created and filed in the patent as that of Mr. Gold, but not previously used in a published game and appropriately represented by a brown-coloured token.

Clue the VCR Game: Brunette was played by Michael Dell'Orto. Making his first appearance in the Clue world, M. Brunette arrives announcing himself as Mr. Boddy’s lawyer. He takes it upon himself to brief the others of Boddy’s wishes during the will reading. However, he is secretly a conman who hopes to cheat the others out of their earnings along with his foster daughter, Miss Peach. Not surprisingly, he also isn’t really French. He always wears an eye patch that he allegedly needs.

Retrieved from "https://cluedo.fandom.com/wiki/Cluedo_Wiki?oldid=4317"
Community content is available under CC-BY-SA unless otherwise noted.